Most crimes of occupational fraud are motivated, at least in part, by some kind of financial pressure. And while committing a fraud, the perpetrator will frequently display certain behavioral traits associated with the stress or fear of being caught.

These “red flags” are behavioral and system-based clues that can be picked up by attentive managers, colleagues, internal auditors, or subordinates. In turn, these clues can put an organization “on notice” that a trusted individual may be engaging in some form of improper or fraudulent conduct.

In 81% of the cases studied, the perpetrator had displayed at least one—usually more than one—behavioral red flag. The chart below shows the percentage of cases in which a red flag was reported in the 2012 study. 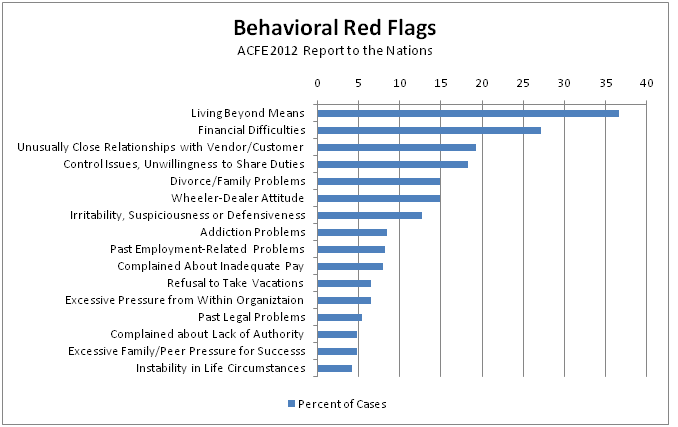 Red flags for a business include:

When it comes to limiting the losses associated with occupational fraud, prevention is critical. Fraud prevention measures ranging from anti-fraud training, reporting programs (whistleblower programs), and hiring policies to “setting the tone from the top,” performing risk audits and assessments, and putting in place strong anti-fraud controls are essential in being proactive about risks.

As author and leadership expert Robert Stevenson pointed out in his keynote address at a recent ERM Conference, “If you don’t like paying attention to risk, you will hate paying attention to extinction.” He emphasized the need to approach risk management beyond just reducing the chance of losses, but rather to ensure the survival of an organization. He emphasized, “Future success is not inevitable because of past triumphs.” In other words, waiting until something ‘bad’ happens is waiting too long.

If you need help designing an effective fraud prevention program that doesn’t let “red flags” go unnoticed, we can help.  Request a consultation with a Lowers Risk Group consultant today.