Imagine your business is being asked to partner with the trendiest new luxury goods distributor. They have a strong presence throughout Europe, are establishing a growing network of suppliers, and come backed by some significant capital. Wow! It MUST be your lucky day!

Or is it?  A quick look into the distributor’s leadership reveals that the principal supplying that capital is best known for stepping down as the founder and CEO of his previous business after multiple Lacey Act violations, including unethical sourcing and the sale of dangerous, toxic products. These violations cost his previous company millions in criminal penalties.

Not to ruin the fantasy here, but this is the real world (and a true story).  Proper due diligence saved the business from this bad partnership before it could happen.  It truly was their lucky day.

This positive outcome is less common than you might think. Fraud is everywhere, but just a small amount of basic due diligence can help a business avoid it or other unnecessary risks. From a small-town pawnbroker that lost his business after hiring a friend whose felonious past was only revealed after a six-figure theft, to a multinational corporation that lost millions in fraudulent payments to a duplicitous supply contractor living well beyond his means, there are countless stories demonstrating the steep price paid by companies that trusted before verifying.

What is due diligence?

Due diligence is a specific but flexible process performed by qualified experts to identify and obtain disparate information to form a complete picture.  In the above example, the research would have included the history and business filings of the company (as well as those of the principles, owners or key management) and any actual or perceived affiliations, to name a few.

Why do businesses need it?

New personnel or new partners can shape the future of your business.  Whether it’s a college coach, a board member or a supplier, the whole story matters and should include:

What else should I know about due diligence?

It’s always important to understand who you’re working with to eliminate the potential for fraud. When doing your due diligence, here are some best practices to consider:

Incompetence is often much more apparent than criminal activity.  When evaluating a person or vendor, does your due diligence evaluation include the following?

If your business is struggling with due diligence or would like to set up a consultation in-person or remotely, please reach out to us.

It would be really good to know who in your organization is most at risk of perpetrating a fraud. You could then take steps—counseling, reviewing controls, rotating jobs—to protect against that risk.

Theoretically, the Fraud Triangle does a good job of stipulating who might be a fraud risk. It says people are more likely to commit an occupational fraud when they have motivation, opportunity, and a rationale to excuse their crime. The rationale is an individual factor which organizations cannot address in advance, but there can be indicators based on motivation and opportunity.

The 2018 Report to the Nations on Occupational Fraud and Abuse contains some concrete information that is consistent with this theory. In research for the Report, the Association of Certified Fraud Examiners (ACFE) identified 17 behavioral “red flag” traits that might be associated with a perpetrator of fraud. These are primarily indicators of motivation or pressure that may cause a potential fraudster to flip into active fraud.

85% of the fraudsters in the 2,690 cases ACFE reviewed had at least one of the red flags, and 50% had more than one. They are at least somewhat predictive.

The most common red flags have to do with financial difficulties (motivation, pressure). Since 2008 when the first edition of the Report was published, the six top red flags, in order, have consistently included:

Much is written about these common behavioral red flags of fraud, but there are other red flags organizations should be aware of when it comes to predicting and preventing fraud. So-called human resources-related red flags and non-fraud-related misconduct can offer valuable insight to those responsible for anti-fraud programs.

According to the ACFE’s 2018 report, 39% of fraudsters had experienced some form of HR-related red flags prior to or during the time of their frauds. The most common of these red flags were negative performance evaluations, and fear of job loss. 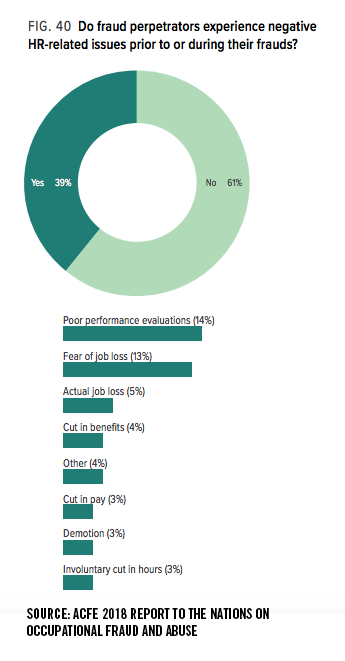 According to the ACFE report, 45% of fraud offenders had committed some form of non-fraud workplace violation, which could potentially indicate a link between occupational fraud and other forms of workplace misconduct. The most common non-fraud violation was bullying or intimidation, which was observed in 21% of all cases.

To anticipate occupational fraud, the organization has to be well acquainted with its members at all levels of authority. Regular or routine evaluations (background checks, interviews, work reviews) would help to identify individuals at risk, and help them avoid failure. A fraud prevented saves the organization from damage to people, brands, and profits.